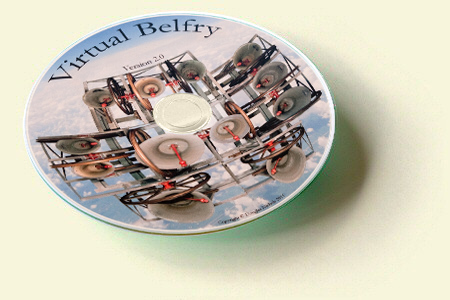 Tapping the spacebar causes my own bell to sound immediately and has no effect on the ringer animation. Why is that?

Some people want to be able to tap the spacebar at the time they would begin to pull the rope if they were actually ringing, and have the keystroke commence the movement of the animated ringer on the screen. Instead, tapping the spacebar has no effect on the animation and simply causes the bell to sound immediately. This is not a program fault and is quite intentional. While it may be possible to make the program work that way, it is highly unlikely that the result would be satisfactory. There is no obvious and clearly defined moment when the ringer begins to pull the rope. The tension begins before the end of the previous stroke and there is usually a fairly smooth and seamless transition from checking to pulling. Furthermore, the time taken from this transition to the sounding of the bell will vary a lot depending on your action - hunting up, down, dodging etc.

In addition to the above, there is only one "moment" in the swing of a bell that has any precise definition. That is the moment the clapper hits the bell and makes the sound. The ringer's attention should be focused on that. Designing the program so that the ringer has to focus attention on some variable and rather vague point a second or two earlier would not be good design.

The best advice is to avoid using the ringers when you want to practise by tapping the spacebar. Look at the Blue Line window instead. The animated ringers are great for practising ropesight, but only if you have one of the ropes in your hand!

Can Virtual Belfry be used like other simulators, connected to real bells in the tower?

Yes. This ability was introduced in version 3.0, along with some animated graphics designed to help the teaching and learning process. Several different sensor types are now supported, including RS232 control signals (using the pins of a serial port connector), Bagley Multi-Bell Interfaces and other, generic ascii-character-based interfaces.

Which bells were used to make Virtual Belfry?

The photographic animation of the Bells Window features three sets of bells:

Most of the sound recordings feature the above bells, but also included are recordings of the magnificent bells of St. Peter's Cathedral, Adelaide.

The tenor, and perhaps the second largest bell, strike slightly late on the last blow before standing. Why is that?

The delay has been introduced artificially because the author felt that striking with mathematical precision right to the end sounds robotically perfect and not entirely realistic. But it can be adjusted. Refer to the online help topic called "Behind the Scenes". It includes a paragraph about a text file named "tower.txt", which includes settings to control the amount of delay for the final stroke.

While ringing a plain course, why do the control panel buttons for bobs and singles turn themselves off and on again at the end of every lead?

The buttons disable themselves during the brief period when it would be ambiguous to make a call. Like real ringers, the bells on the screen require a couple of blows' notice to cope with calls. Once the deadline has been reached there is a period of ambiguity - the actual making of the bob or single (or no call) has still to be witnessed on the screen, but the program is a couple of blows ahead of the visible action and so the bells are committed to your decision. Once the processing of the bob or single (or lack thereof) has finished inside the program, the buttons are made available again.

The sense behind doing this becomes more obvious when you try calling a touch of Original, where calls can occur at every handstroke. It is essential in this situation to have a clear dividing line between calling opportunities.

What is that old bell I can see at the top right corner of the Bells window for the "Twelve Bells" tower?

That is a Mears bell, cast in 1822. It was originally mounted on a frame outside the original St. David's church that stood on the site of the current tower. After the original church was demolished in 1868 the bell found a home in another church across the river from Hobart. In recent years it has sat on the ground floor of the cathedral's tower. Finally, to make room for recent improvements to the ground floor area, it was hoisted into the belfry. One day it might be mounted for chiming.

What are those extra bells I can see on the left hand side of the old eight-bell frame at Hobart?

Following augmentation there was no longer space for these bells at the level of the frame and they were lifted up to a new location about 5 metres above the rest of the bells.

On the Bells window, why do the sliders move to the centre as the bell is pulled off the stay? (and why do they make small movements all by themselves at points during the stroke?)

Well spotted! The original 8-bell tower had Hastings stays so there were no sliders. This was very convenient for Virtual Belfry. The sliders in the new installation presented a problem. Think about the images needed for the animation and you might understand that the slider has to be in the same position all the time while the stay is not in contact with it (unless the program was very clever and animated the slider as a separate image element - something that would have been FAR too complex!!) The only sensible position is dead centre, so the sliders were equipped with strong rubber bands during filming to ensure that they pulled to the centre as the bells rose from the set position. The system wasn't perfect, however, and the bells were able to nudge the sliders a little during filming without them returning exactly to the centre. This means that the sliders are not always in the same position for every frame.

When it came to capturing the images for the Maryborough bells, a way of ringing the bells was devised that dispensed with the need for the rubber bands while achieving the same self-centering result (I'll leave that as a challenge for you think about).